The founding of the Waldläufer tribe was more a coincidence than intentional. Horst Hofmann and Franz Wurdack had been involved in the budding youth work in Grafenwöhr at the time. Sometime in May 1950 a meeting was scheduled. When Horst and Franz arrived for this, they found that they were not only the first ones, but would probably remain the only ones. Somewhat disappointed and frustrated, they decided to skip the meeting and go to the movies. There they met the other members of the "youth work team". Horst and Franz agreed that this was not the mentality in which they wanted to do youth work. After some consideration, they decided to found their own group, a scout group. The foundation took place in the Gasthof Specht in May 1950.

For the youth work in Grafenwoehr this was a novelty, as there had not been any interconfessional youth organization up to that time. Until then, the youth groups had been kept separate according to their denominations. This also promptly posed the first problem, because the city pastor at that time, Ludwig Schmidt (also known as "Monsignor" to the older Grafenwöhrers), sensed a "danger" to the youth and morals in the lack of denominations and "intervened against it". One of his demands was that the Scouts should present their program and that he reserved approval. However, Horst was not deterred from his idea. After he had personally visited the parents of the scouts at that time and had explained his conceptions, they had nothing to object to a further membership of their sons at the scouts. Several more disputes with the pastor followed until he stopped his attempts to control the Scouts and their program. However, the pastor railed against the Scouts from the pulpit well into the 1970s.

Another problem arose from the fact that only five years after the end of the Second World War and the end of the HJ, a uniformed youth group, that used terms such as "Führer" and "Gau" didn't sit well with the Grafenwöhrer population. Although the people of Grafenwöhr had no problem with electing the former leader of the HJ as chairman of the Stadtjugendring, it required a lot of patience and strength on the part of the Scouts to convey to the people of Grafenwöhr that behind the terms and "uniforms" they had other values than in the days of the dictatorship. On the other hand, it was precisely these "attacks" from the outside that also strengthened the sense of togetherness of the young Grafenwöhr scout tribe.

In 1952 the tribe undertook its first trip abroad: Switzerland was the goal. At that time the scouts still used to hitchhike by the way, as it was the only way to get around cheaply.

In 1955, our tribe made its first public appearance with the dedication of the memorial stone for the victims of the expellees, which is located in front of the entrance to the cemetery. It was two Scouts who unveiled the stone. For many of the young people of our tribe this was a moving moment, since quite a few of them came from the German eastern territories of Sudetenland, Pomerania, Silesia and East Prussia. Many of them had lost relatives through flight and expulsion. Since this appearance the tribe was called "Stamm Waldläufer" in the tribal chronicle.

Our tribe experienced many stories and adventures on its trips. In 1954, our tribe took part in the Whitsun camp of the regional association "Gau Bayern" near Landshut. By the way, the 10 scouts from Grafenwöhr covered the 160 kilometer distance by bicycle. During the camp, a large group of young people from Landshut decided to "capture a few flags" from the scouts during the night.

The scouts, all sturdy, self-confident nature boys, however, defended themselves extremely fiercely. A serious fight ensued, which only ended when a patrol of military police arrived from a nearby American radar station. By the way: One of the "attackers" was later found unconscious at the edge of the camp. An unforgettable camp for all.

During the trips, the Waldläufer also experienced world history again and again: When they made a major trip to Austria in 1956, they witnessed the departure of the last Americans and Russians who left the Alpine Republic due to the State Treaty. Or the Sputnik! This first satellite, which the Russians had shot into space, was discovered by our scouts during a trip. At that time, however, they did not yet know about the success of the Russians, so the strange blinking object was thought to be a UFO.

For us Waldläufer, a major highlight took place in 1957 when we traveled to England for the Jubilee Jamboree (World Scout Jamboree). This meeting commemorated both the 100th birthday of Lord Robert Baden-Powell, the founder of the Scout movement, and the 50th anniversary of the founding of the Scout movement. However, many of our boys could not afford such a trip. In order to earn the money for it, petition letters were written: The city of Grafenwöhr donated, the then Bavarian Minister President Dr. Hoegner donated, and many more.

In the end, the sum of 1,000 marks was collected. For comparison: A bread roll cost 5 pfennigs (2.5 cents) at that time. The jamboree itself was a great success and a tremendous experience for the Grafenwöhrer Waldläufer. Among the 30,000 participants was the heir to the British throne, Prince Charles, as well as Olave Baden-Powell, the wife of the founder. Among the 50,000 visitors was also Her Majesty Queen Elizabeth II as well as Sir Edward Heath, then Prime Minister of Great Britain. 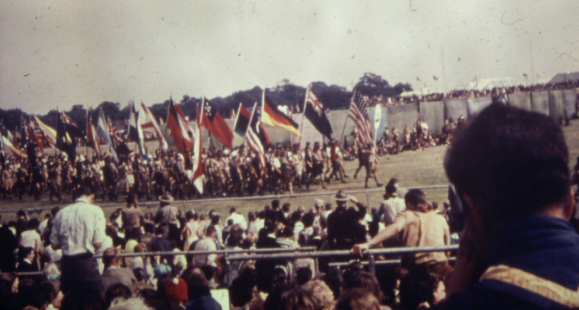 The picture shows the marching in of the delegations at the Jubilee Jamboree 1957 in Sutton Coldfield, England. Among the 30,000 participants of the 9th World Jamboree were also the Waldläufer from Grafenwöhr.

The first group lessons took place in the Lourdes Grotto on Annaberg, built in 1894. Soon the Waldläufer were able to move into barracks that the US Army had made available for the youth movement. This then fell victim to the expansion of the TUS-Sportheim. (Note: The TUS-Sportheim was already torn down years ago, the area now houses a supermarket).

In order to have their own domicile, they asked the city of Grafenwöhr for help. Thanks to the support of the mayor of the time, Walter Asam, they were given a site above the Naturbühne on which they could build their own home. The home was inaugurated in December 1968. 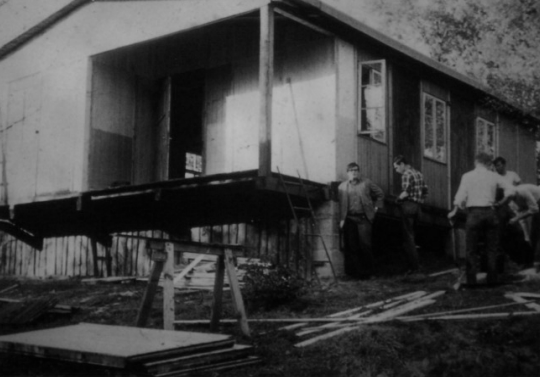 One of our current members commented on the picture with the words "I have never seen our home this clean..."

Many things went quite smoothly for the "Waldläufer" at that time, because Horst's father served one term as a city councilor in Grafenwöhr and represented the interests of the "Waldläufer" there.

The Johannisfeuer is an integral part of Grafenwöhr and was organized by the Stadtjugendring after the Second World War. After interest had waned at the end of the 1980s and sometimes the burning only took place in the presence of the fire department, the Waldläufer took over the organization in 1990 on behalf of the Stadtjugendring. The revival succeeded and soon we were able to burn the Johannisfeuer in front of an audience of about 200 people.

One unrecorded year before the turn of the millennium, we erected a fire pile as shown in the picture. As filling material of the "block" we took what was tangible, among other things an old chair. However, for some inexplicable reason, this chair managed to escape our "grasp" during the construction and remained. As a joke, we placed the chair on the top of the pile.

Somewhat surprised, we read a few days later in the "Neuer Tag" that this was an old Grafenwöhr tradition - this is how customs are created. We have been cultivating this tradition for years now. Only in 2010 there had not been a Johannisfeuer - we had no chairs left... 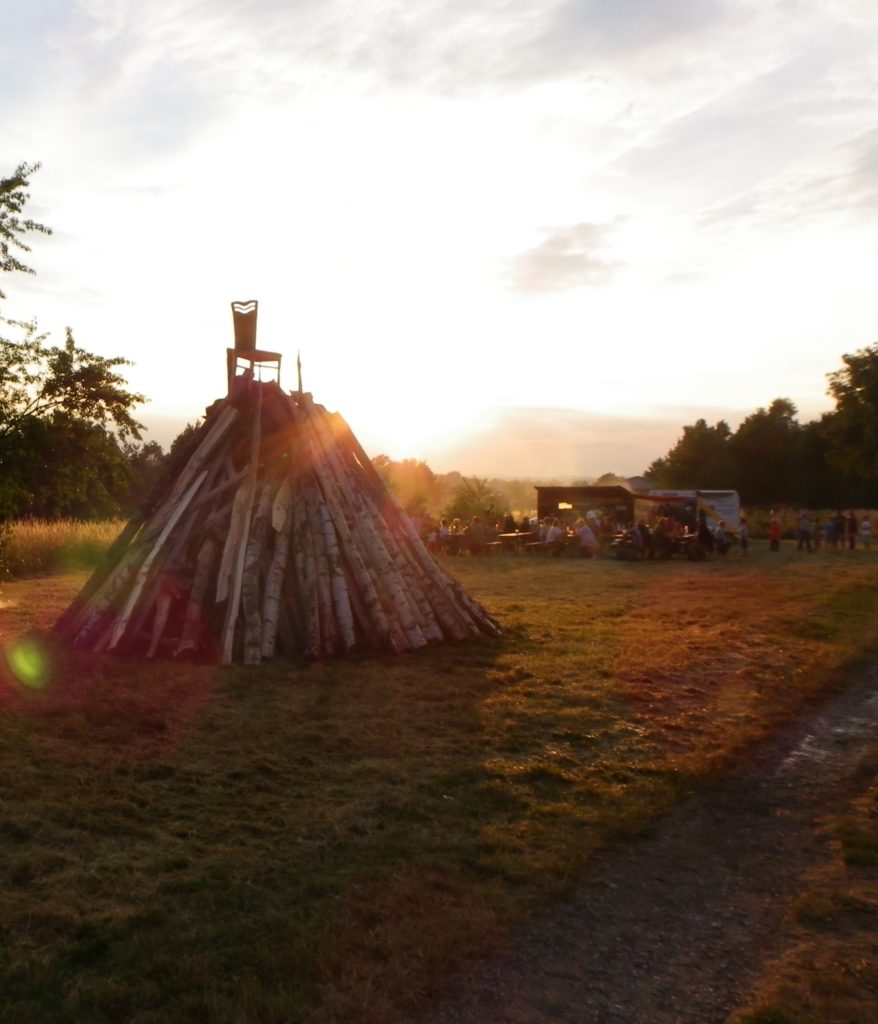